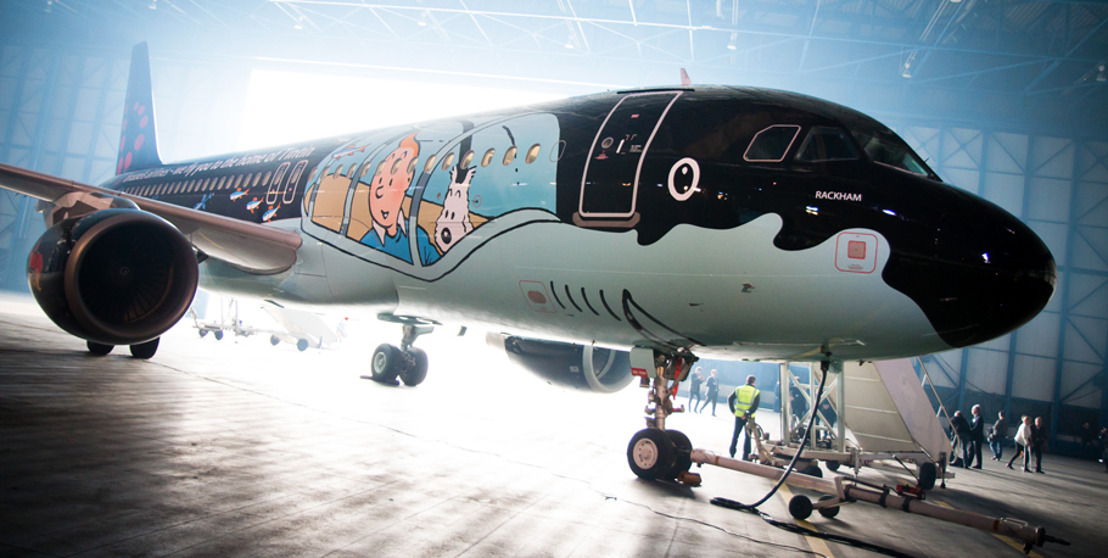 In the presence of the plane spotters and VIP guests, Brussels Airlines and Moulinsart have today presented the aircraft livery they have secretly been working on for several months. The result is a 37m long black shark, based on Professor Calculus’ shark submarine from the Tintin adventure, Red Rackham’s treasure. The aircraft was baptized “Rackham”. On the fuselage we read: “We fly you to the home of Tintin”.

Brussels Airlines wants to be a proud ambassador of Belgium. The airline wants to promote the many Belgian talents to the world, just as it does for the Belgian gastronomy with its Belgian Star Chefs program, its large offer of Belgian products on board its flights, its partnership with the Belgian national football team The Red Devils and the world’s largest music festival Tomorrowland.

Tintin, the historical Belgian character created by Hergé, who travels the world on adventurous quests, is the perfect travel partner for Brussels Airlines. Never before has the legacy of Belgian cartoonist Hergé been translated onto the fuselage of an aircraft. Hergé himself was fascinated by planes, they are the most used means of transportation in the Tintin oeuvre and they were always drawn with great technical precision.

For the painting of the aircraft, Brussels Airlines worked with aircraft paint artist Andre Eisele, who had the challenging task to adapt the perspective of the drawings prepared by Moulinsart’s graphic designers to the unusual curves of an aircraft fuselage, to get as close to the original shark submarine design as possible. The entire paint job took 1500 man hours in total.

“This aircraft is a dream come true. The partnership with Brussels Airlines is a perfect marriage for us. Tintin is all about Belgium, all about Brussels, where he was born, as was Hergé. Tintin is also all about adventure and travelling, and with this plane we bring our two worlds together perfectly. We had many ideas about the design of the aircraft, it could have been the rocket from the album “Destination Moon” for example, but we unanimously chose the submarine, and we’re very happy with the result.”

“I was personally brought up with the comic albums of Tintin, I learned to read with them. This partnership means a lot to Brussels Airlines. Tintin is a frequent traveler, discovered countries around the world  and met people of different nationalities and cultures during his adventures.  Abroad, we feel like an ambassador of Belgium. In all we do, we build on our Belgitude while emphasizing  on ‘the best of Belgium’; Tintin fits perfectly into this positioning and represents the characteristics that we also want to put forward: being open minded and welcoming.”

After the unveiling this morning, Rackham’s maiden voyage took place, a 1 hour and 45 minutes flight to Toulouse. Spotters, aviation enthusiasts and Tintin fans can follow the whereabouts of the plane on brusselsairlines.com and are invited to share their pictures tagged with #SNRackham. The special Tintin livery will remain until 2019.

Tintin, a character imagined by the great Hergé, the father of the “ligne claire” (“clear line”), made his first public appearance on 10 January 1929 in the pages of the Petit Vingtième (the Little Twentieth), the weekly supplement for youngsters of the Brussels daily newspaper Le XXe Siècle (the XXth Century).

At present, the “Adventures of Tintin” still fascinate the general public and inspire artists, writers, directors, screenwriters … Tintin embodies the values with which we can all identify.

We all have something of Tintin in us.

The copyrights of Hergé’s work are managed by the limited-liability company MOULINSART, the only one authorised to exploit names, characters, objects and symbols derived from Hergé’s work.

The quality and respect of Hergé’s work remain the course of action of any MOULINSART project. Its mission is to protect this work, to pass on the graphic force of Hergé while preserving its authenticity.