From the Big Apple to Moscow

Tomorrowland noticed a growing demand from people abroad wanting to visit the festival and decided to enter into a partnership with Brussels Airlines. Attractive travel packages were put on offer, including flight, festival ticket and hotel accommodation or tickets for the DreamVille camping. The concept proved to be a success: the packages were sold out in a matter of hours.

For us as well as for Brussels Airlines, service and safety come first. We therefore considered it a good match, and the icing on the cake is that we are able to decorate a plane in Tomorrowland livery, both inside and out! As soon as you board the aircraft, you’re in the right atmosphere: through this partnership, we are able to start the party while the passengers are still in the air.
– Debby Wilmsen, Tomorrowland’s press officer

Thanks to this partnership with Tomorrowland, we are able to associate our airline with a fantastic Belgian music festival which is incredibly popular in virtually all our European destinations. In no time at all more than 2,000 flight tickets were booked. Like Brussels Airlines, Tomorrowland has opted for quality and creativity. Out of these ingredients a great partnership has emerged, full of creative surprises, like the unique DJ flight and the giant Ferris wheel.
– Christian Dumortier, marketing manager at Brussels Airlines

DJ duo Dimitri Vegas & Like Mike and Antwerp DJ Yves V surprised the passengers who departed from Barcelona with a DJ set on board. The DJs played a set at an altitude of more than 10,000 metres to warm up the enthusiastic crowd of 140 passengers and to set the tone for three fantastic days at Tomorrowland. Upon arrival at  DreamVille they were able to continue the dancing to the beats of The Gathering, the traditional DreamVille party that takes place the day before the festival opens.

The treat is on Brussels Airlines

At Tomorrowland, Brussels Airlines will bring the visitors' heads in the clouds for a brief moment: the main attraction at Tomorrowland 2012 is Europe’s tallest ferris wheel : The Brussels Airlines Cloud Rider. Nearly 60 metres high, the wheel was brought in from Düsseldorf and 20 mechanics were responsible for constructing it. The 40 pods can each hold 8 passengers at a time, meaning 2,200 passengers per go. Thanks to Brussels Airlines, all Tomorrowland visitors will be treated to a free ride on the wheel. The personal code on their special Tomorrowland boarding pass also gives them a chance of winning some really great flight prizes, including one year of free flights with Brussels Airlines.

On Friday 27 July at 12.00, the festival starts. The organisers are expecting 180,000 visitors and 35,000 DreamVille guests. The festival ends at midnight on Sunday 29 July. This year, those who stay at home can also enjoy the festival thanks to Tomorrowland TV: seven hours of live television on the Tomorrowland YouTube channel with live sets, interviews, extras and the all-important look behind the scenes. 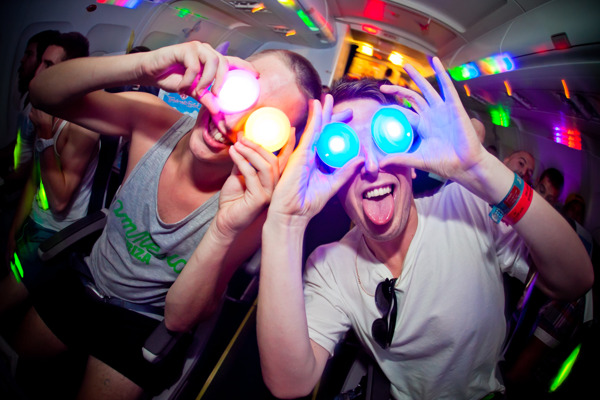