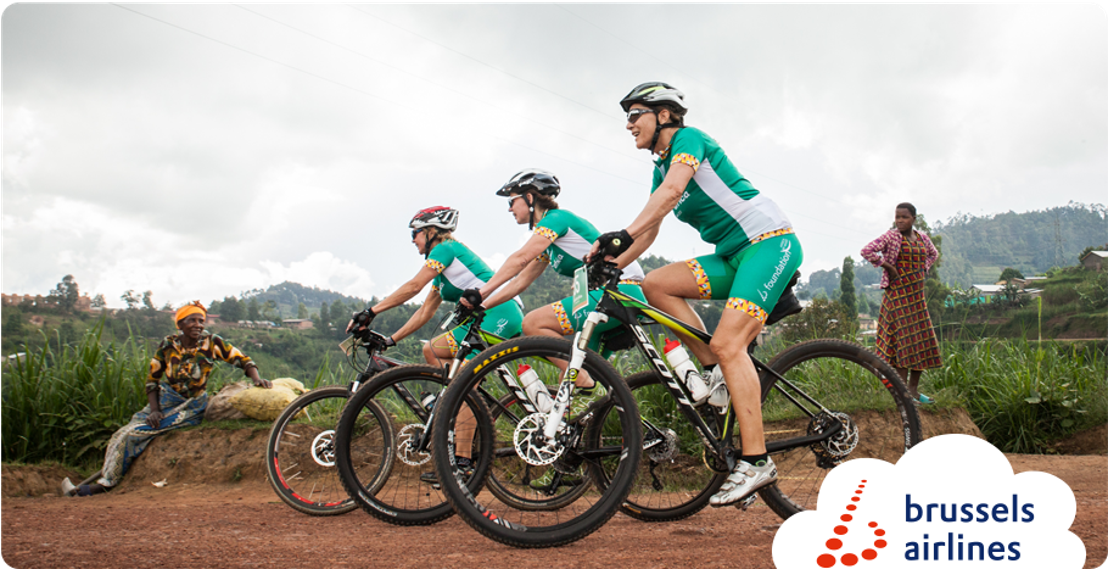 This week, 52 Brussels Airlines, Eurowings and Lufthansa employees completed a 320 kilometer mountain bike tour during the fifth Bike for Africa edition, in Kigali – Rwanda. Bike for Africa is an initiative by Brussels Airlines employees to support local entrepreneurs and organizations in Africa, the Belgian airline’s most important market, and to promote the beauty of the continent. On the last day of their itinerary, the Bike for Africa group handed over a cheque of €41,000 to the Rwanda Charity Eye Hospital, a local coffee company (Kinunu Agroprocessing) and an animal feed producer (Kokka).

Today, on the final day of Bike for Africa 2020, Dieter Vranckx – CEO of Brussels Airlines – and Herman Carpentier – VP Aeropolitical Affairs at Brussels Airlines – handed over the funds raised by the Bike for Africa team to the Rwanda Charity Eye Hospital, local coffee producer Kinunu Agroprocessing and local animal feed producer Kokka, who aims to improve animal feed quality and hereby raising the quality of meat and milk for human consumption. Employees of Brussels Airlines, Eurowings and Lufthansa gathered €41,000  through several fundraising activities, making it possible to support these three local entrepreneurs in developing their business sustainably.

The “Rwanda Charity Eye Hospital” founded by the Belgian ophthalmologist Piet Noë is the main humanitarian project Bike for Africa 2020 supports. The scarceness of ophthalmologists - only 14 for 12 million inhabitants – is a major issue in Rwanda. Piet, who invested all his savings in the hospital and who depends on friends & relatives to help with fundraising, opened the hospital in 2018 with the aim to provide eye care to all Rwandans who need it. The Bike for Africa proceeds will allow the hospital to invest further in equipment and to help hundreds of patients with cataract, eye cancer and other eye diseases.

Another share of the funds goes to Kinunu Agroprocessing, a local coffee company whose entire production chain is local. A local animal feed producer is the last beneficiary of the Brussels Airlines project. Thanks to Bike for Africa’s contributions, the company will be able to increase their production significantly.

These last two entrepreneurs did not only receive financial support, but also worked together with a Design Thinking team of Brussels Airlines colleagues, helping them look at the current challenges they face to grow their business. Through interactive workshops, the local entrepreneurs and Brussels Airlines colleagues shared their knowledge to facilitate innovation, growth and problem-solving within the organization.

All three projects are located on the Bike for Africa route that ran through the Northwestern provinces of Rwanda, around Lake Kivu and ending in the country’s capital, Kigali. Kigali has been part of Brussels Airlines’ network since the very beginning of the airline’s operations 18 years ago. It is one of the company’s 17 Sub-Sahara destinations, out of Brussels, the capital of Europe. With destinations in 16 western-, central- and eastern African countries, the continent is the core business of the Belgian airline and a very important business segment for the whole Lufthansa Group. Together with Lufthansa and Swiss, the Lufthansa Group – where Brussels Airlines is part of - is the second largest airline group in Africa, serving 41 destinations in 29 countries, totaling 166 weekly connections. The Group creates more than 2,000 local jobs in African countries, boosting the development of the continent.

“Today, Africa is home to some of the fastest growing economies in the world, with a multitude of sectors growing faster than the global average. Investors and multinationals are increasing their commitment to the continent and most countries will see a growing middle class. Combined with the ‘urban explosion’ and fast growing workforce, the future of Africa is promising and makes it a very important continent to invest. Together with the Lufthansa Group, we have a wide airline footprint in Africa and with Bike for Africa we have a chance to showcase the beauty of the continent and to provide sustainable support to local organizations.”
​
​- Dieter Vranckx, Brussels Airlines CEO